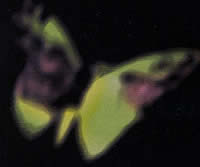 Throughout July 2005 the Cruck Barn was transformed by the sound and video installation Metamorphosis, exploring the idea that human actions can irrevocably alter the patterns of nature.

The work was a collaboration between three WSI artists (Hannah Fox, Tom Lloyd and Dan Fox), students from Lancaster University Computing Department and .:thePooch:. – a group who explore the use of science and technology in art and the boundaries between the two.

A screen completely filled one wall of the blacked-out barn, showing video images of coppiced oaks, the woodland floor carpeted with bluebells. Up and down the beams of the barn, hundreds of paper butterflies fluttered in the breeze. 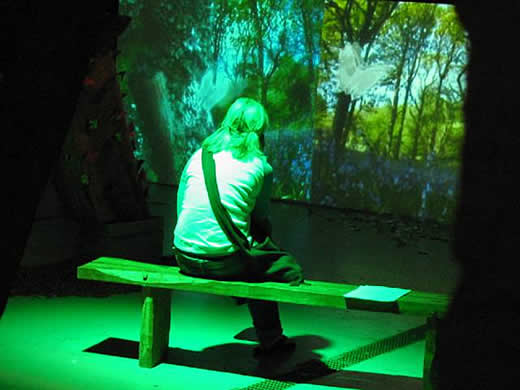 Visitors could sit and watch the woods, and listen to the bird song, but those who moved around the space triggered less peaceful sounds and images. An animated butterfly, which had been resting quietly on the trunk of an oak tree flapped furiously across the screen, accompanied by jarring electronic sounds.

The piece uses sophisticated technology, including movement sensors and careful programming to co-ordinate sound and images.

In September, the piece was moved to Lancaster University campus, where it was installed in an underpass, and changes of sound and image were triggered by passing traffic, raising new questions about the relationship between nature and technology.