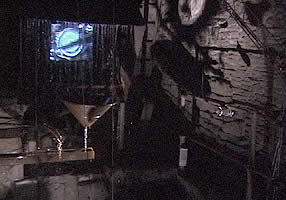 Commissioned by the Heritage Trust for the North West and created in a short month by Welfare State International (WSI) Ford was an original site-specific installation for Higherford Mill, Barrowford, Lancashire

Excerpts from the 'Ford' program

FORD marked a return visit to Barrowford for WSI. The last occasion being in 1974 when we invented a New Year's Day Carnival in the Park.

FORD was a celebration, a visual feast and an interactive promenade installation. It marked (obliquely) passages in the history of Higherford Mill which was open from 1824 - 1969. FORD was also the first commissioned artistic installation in the Mill and the pathfinder for further stunning collaborations.

FORD - the story starts at the front of the old loading bay and moves through a series of tableaux with accompanying soundscapes.

We hope you enjoyed our fragile and playful environment that both celebrates the past and offers signposts to the future. We had suggested that visitors left the space (by the small back door within the big doors) and walked 100 metres to the pack horse bridge up river to contemplate the power and age of Pendle Water, the river which was there before the Mill and which will still be there in 100 years more.

Rick Faulkner, Christine Keogh and Celia Cross for inviting WSI in the first place and making it happen.

North West Arts Board and Mid Pennine Arts and other funders