9 July was a day of blazing sunshine, perfect weather for the first July Picnic. Staged at WSI’s new venue – a grassy amphitheatre on the outskirts of Ulverston – the event saw an afternoon of public workshops build to a grand sunset finale. 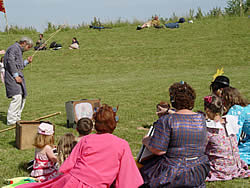 Workshops in the afternoon included puppet-making, song, drumming and body percussion. The body percussion workshop, led by Australian Matt Hill, was a favourite with participants and bystanders. Pairs of plastic fizzy drink bottles, sealed with a valve and inflated to a range of pitches created a wonderfully melodic gamelan-like sound.

From time to time the creative bustle was stilled for performances: from the Stan Laurelettes, and a nature pageant by children from Sir John Barrow School. 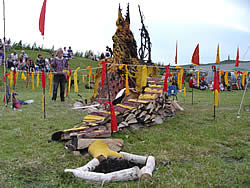 Meanwhile Martin Brockman and Bob Fisher were constructing a dragon-shaped earth oven at the centre of the amphitheatre. They fired the oven from the inside as they worked on the outer extremities and smoke puffed from the dragon’s jaws all afternoon.

In another corner of the field, Sue Gill was hard at work kneading bread to be baked in a wood-fired oven.

Many people at the picnic didn’t take part in the workshops, but came along to have a look and stayed all afternoon, watching and listening, munching on hot fresh bread or sitting on the grass and having an ice-cream. 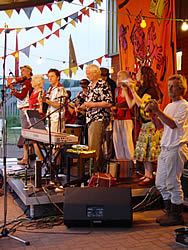 The workshops broke off at 6pm for food and a break. Some people went home, while others stayed at the amphitheatre enjoying their picnics and the afternoon sunshine. By 7.30pm many had returned for a rehearsal of the evening’s performance, involving many of the children and adults who took part in the afternoon workshops, alongside members of Boomdang, Lanternhouse Voices and the Lanternhouse young performers’ group.

After the rehearsal there was a brief pause for uproarious barn dancing, then around 9pm, as the sun began to sink towards Hoad Hill, the final performance, The Dragon’s Tale, began.

The performance pitted mean-spirited, bureaucratic-minded crows against the creative spirits of a dragon. The stilt-walking crows, accompanied by their ocean liner sidekicks, descended on the dragon oven, where they snatched away a dragon’s egg, incubating in the flames. 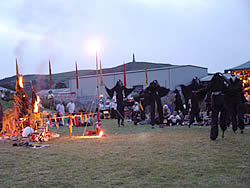 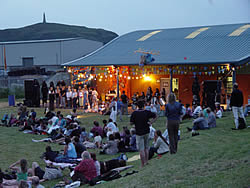 The crows tossed the egg carelessly into the air and it seemed it must break, but the egg was rescued in a blaze of fireworks, crackers and flares, by a wheeled avenger. Flying down a ramp on his BMX, Dragon Boy saved the egg and returned the forces of creativity to safety, closely followed by a giant Chinese dragon. 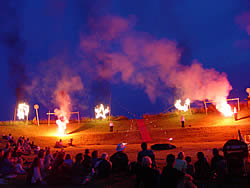 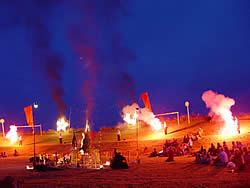 A finale of fireworks and song brought most of the audience to their feet, dancing round the earth oven, which was now ablaze with a roaring fire.