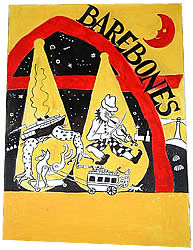 As the band played the audience out to a wistful calypso, a small girl dissolved into tears. “But I don’t want it to end.” Her Grandma said she would try to get tickets for tomorrow, but unfortunately, all three shows the following day were sold out. The little girl and her Grandma were, however, lucky enough to have witnessed one of the best WSI shows in years.

The cruck barn at Lanternhouse, Ulverston, was transformed into an intimate big top and the rink, into an evocation of Morecambe Bay, that held as many surprises as the real thing. The ensemble company of puppeteers, led in a spell-binding performance by Hanna Fox, with an exquisite band and singers, led by Tim Fleming, produced the sort of magic the company built its reputation on.

With all the bitter-sweet pathos of a ‘white-faced clown’, Andy Burton guided the audience on a mysterious journey to celebrate Morecambe Bay’s rich history. Myths, and legends of ghosts and exploitation had been carefully gleaned from local people to reveal archetypical narratives from the stories of everyday folk.

And John Fox pulled no punches in his uncompromisingly gritty poetry. Charming tales of bygone romance shifted on an emotional ‘riptide’ to the anniversary of the deaths of the 23 Chinese cocklers - the beautiful, treacherous sands showed even less mercy than profiteering mill owners of the Industrial Revolution, or gangmasters of the global economy. ‘Artfully’, the company charged the audience with a duty to reflect on life, beauty and the tragic injustices of real life.