Founded in 1968 by John Fox and Sue Gill, Roger Coleman and others, Welfare State International was a loose association of freelance artists bought together by shared values and philosophy. 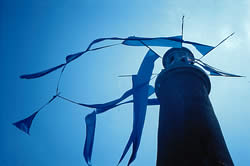 WSI first became well known for large-scale outdoor spectacular events. When the company began, taking art out of theatres and galleries into the street was considered revolutionary. The company's name was originally 'The Welfare State' offering art for all on the same basis as education and health.

Some big events such as "The Raising of the Titanic" (London International Festival of Theatre 1983), 'False Creek' in Expo '86, Vancouver, and the biggest lantern festival in Europe (Glasgow City of Culture 1990) have become touchstones balancing the aesthetic with the social. 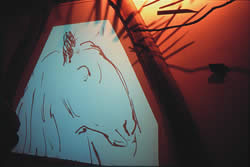 'Engineers of the Imagination', the WSI Handbook, spread ideas and techniques worldwide and is still essential reading for artists working in the community. Many artists and companies in Britain and abroad have been influenced by Welfare State's vision and practice.

From 1983 WSI championed local participation in lantern parades, street flag displays and carnival performance from its new base in Ulverston, Cumbria. Today Ulverston is known as a 'Festivals Town' where culture and economic regeneration go hand in hand.

Looking beyond public festival, the company also moved into inventing and leading ceremonies for rites of passage, creating installations, and working with children and their parents to explore imaginative play.

A Company of Artists 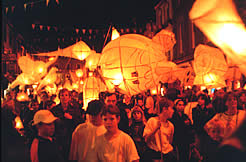 Artists led Welfare State International. The programme was set primarily by creative concerns. Everything we made was original, never repeated in the same way twice. Many of the prototypes generated by the company over the years have become part of the mainstream of the arts of celebration.

Artists were involved at every stage, as members of small creative teams, as project directors and as associates.

The work was led by ideas, but was practical using whatever art or craft forms were appropriate.

The company philosophy can clearly be seen in this statement from 1999.

“Welfare State International is a company of artists who pioneer new approaches to the arts of celebration and ceremony in the U.K. and internationally.

We are seeking a culture which may well be less materially based but where more people will actively participate and gain power to celebrate moments that are wonderful and significant in their lives.

We advocate a role for art that weaves it more fully into the fabric of our lives; that allows us to be collaborators rather than spectators:

Building our own houses, naming our children, burying our dead, announcing partnerships, marking anniversaries, creating new sacred spaces and producing whatever drama, stories, songs, ceremonies, pageants and jokes that are relevant to these new values and iconography.

We design and construct performances that are specific to place, people and occasion.

Special festivals of celebration that reach a wide audience, collaborative exhibitions and installations, original songs and soundscapes, and ceremonies for important occasions in people's lives.

WSI's artists are deeply concerned for the survival of the imagination and the individual within a media-dominated consumer society, in which art too has become a commodity. All our work - especially our generation of primary artwork - takes a holistic and educational perspective.

Our long-term aim is to establish creative communities on our doorstep: to work in partnerships to develop a creative society where the full potential of each individual may be realised in a supportive environment, through active participation and imaginative play.

We offer full access and opportunities for the dispossessed and seek a multi-generational and multi-ethnic congregation.

Art has a central and radical role in our lives. In the everyday, it's about what we value, how and why we celebrate.”

Central to the work was the act of passing on ideas. 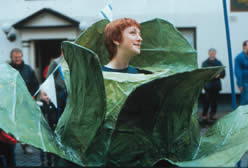 You can read more about these books in the publications section of this website and they can be bought through www.deadgoodguides.com. 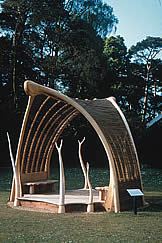 The rites of passage research programme was established in1994 building on a track record stretching over 25 years of creating new secular ceremonies within the programme ofWelfare State International. It was set up to explore new approaches to marking significant rites of passage and to demonstrate the role of artists in this work.

This work continues within Dead Good Guidesl and you can find out more by going to the www.deadgoodguides.com.

Lanternhouse was devised as the WSI headquarters in Ulverston; developed with funding from the National Lottery through the Arts Council of England as a centre to research the celebratory arts. 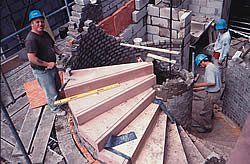 The building is an inspiration: the blue lattice spire, the towers and bridges, the green oak cruck barn hidden in the theatre workshop, extraordinary hand-crafted furniture, courtyard, garden, and flowing water.There is self-catering accommodation for four artists, a unique reference library and archive, sound technology, digital video and multimedia facilities, studios and workspaces including a warehouse/resource centre a short cycle ride away.

Lanternhouse was a major arts project in its own right - a landmark building revealing the art of work. As artist-clients WSI were able to drive the entire process, working collaboratively with architect Francis B Roberts. The building won an award from the Royal Institute of British Architects. "The hand of these artists is evident in every conceivable detail.. [including] the 'star gatherer' kinetic sculpture in the lift. The building was a joy to visit."

Artists have travelled from all over the UK and the world to study at Lanternhouse.

On the 1st of April 2006 John Fox stepped down as artistic director of Lanternhouse bringing to a close nearly four decades of inspirational work. The final act of Welfare State International was the finale of Longline a Carnival Opera in a big top in Ulverston. This final event and the celebration that followed it, bought together artists, audiences, friends and collaborators from all periods of Welfare State's history for a moving ceremony and was a fitting send off to John on his new adventures.

John Fox is continuing with his peripatetic cultural provocation, personal creative imaginings and wild inventions, without the responsibilities of running an arts organisation. It has been rumoured that he has grown a beard . . . , is living in a hut by the sea . . . , and now has the look of a real artist.

For more information on the continuing work of John Fox and Sue Gill see www.deadgoodguides.com.