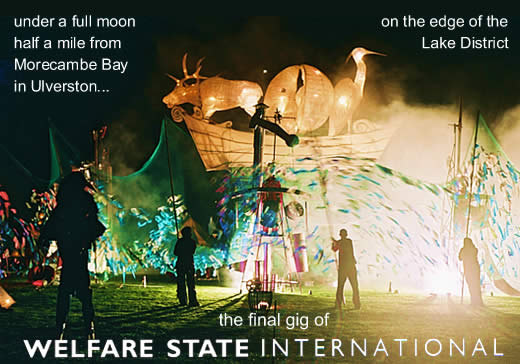 A message from the Artistic Director

“Here make-believe time goes backwards. The journey, like ours, is both complete and continuing so

there is just cause for celebration.”

These lines, spoken by our young narrator at the end of the evening, bring into focus the three intentions of Longline the Carnival Opera.
The first is our completion of three years’ work connecting with the communities of Ulverston and the Bay. Nearly 500 people have had a major influence on the Longline process. At Lanternhouse we have assembled songs, stories and ideas which have gelled into exhibitions, installations, theatrical performances, concerts, CDs, DVDs, workshops, books, lectures and meetings. One job of Longline the Carnival Opera is to pull these strands into a final performance of which we may all be proud.

Its climax will demonstrate the joyous creativity and talents of so many people who have played non-competitively together, in a world where boundaries such as those between professional and amateur, young and old have dissolved like warm candy-floss. To my mind this process is a kind of Utopia. It is rare but could be universal.

The second intention is the show itself. A work of art should be self-contained, with an internal logic reflected both in a consistent aesthetic structure and an integral and entertaining poetic truth. The truth may be difficult and its stark necessity not always palatable to certain audiences or appropriate in the world of surrogate social work to which so much community art has been relegated. I hope we have presented an imaginative and strong distillation of our concerns with which you can connect.

The final intention is a rite of passage for the end of Welfare State International and its extensive network of artists, supporters and friends. This is maybe the hardest part and certainly a part which could be out of joint with the other two intentions. For many of us, especially the Fox family and scores of artists, who have also become family, it’s hard to say goodbye to a way of being which has nurtured us for nearly four decades. We never believed there would ever be a “last gig” but times change and we are all, in our own ways, moving on and away from Lanternhouse and the huge pressures of the last two years.

The photograph shows us in 1972, putting up our own circus tent for the first time. The infant in the middle is Hannah who is the lead ritual maker tonight. The handsome guy with the six pack is Jamie Proud, now Scabby Raven. The man on the right is John Quail, Devil on the South West (submarine) tour and the bloke with the pony tail hanging on (to the rope) is me. Sue Gill, in the middle as always, is the mother of Dan (musician tonight) and Hannah; since the beginning, in 1968, she has always been a key guardian of the WSI tribe and will continue to lead a Rites of Passage programme at Lanternhouse. I am pleased to say Sue and I are still married.

Tonight we are working once again in a circus tent, albeit a hired one. Thanks to the Bay Gods we are outside the citadel again. Art is still a way of life and we’re off. Our nomadic juices are already flowing with expectation and our stubby wings are sprouting (and squeaking) a little. We do of course wish Lanternhouse and its new Creative Director, Stephen Powell, and the loyal staff, all the luck we can.

Thank you for being an audience for 38 years. Finally a most important thank you too, to all our new and old friends who volunteered to give us so much of their time and energy during this last production period. As usual, without you all, we would have never delivered.
Goodnight and Goodbye.
John Fox

A message from the Musical Director

When John and I began working on Longline, we were really excited about writing a new opera together. We knew the piece would have a style all of its own, but we also wanted it to have a popular edge, with singable tunes and music everyone could enjoy. We wanted to create new, uplifting, challenging songs; music to dance to, to cry to; music to celebrate the language, history and people of the Bay; to bring together singers and musicians; to make a wonderful music of our diverse cultures. We wanted to make a new carnival, a pageant, a celebration.

But as we worked we became aware of another purpose – each piece could communicate deep emotion, become an intense distillation of feeling, awaken ancient memories we all could share.

For me these songs are for healing, for singing out demons, for peaceful sleep in a troubled world, and maybe even to rid us of evil and remind us what we are all capable of. I hope you will find a way to connect with the songs, and enjoy them each in your own way.

Longline has already been quite a journey, of fantastic and magic moments. Some of the dreams have already come true, thanks to the singers, musicians who have all worked so hard to help us develop this piece over the last two years. My sincere thanks go out to them today, and to everybody who has worked to bring these ideas alive – hope you enjoy the show!

Read The Guardian's Review of The Longline Carnival Opera

We have put together a CD of music from Longline with an animated 'slide show' of photos from the rehearsal period and the gig itself. The CD costs £10 and is available from Lanternhouse. Please call 01229 581127 or email welcome@lanternhouse.org if you would like a copy.